Talk about productive! To start the day, Danny and I grabbed a coffee at A Twosome Place – getting a free macaroon in the process – and then ventured to Hongdae, getting a mixed mandu (dumplings) platter for lunch at a place that’s been on our bucket list. Shortly after we found Bau House, the dog cafe. Because we wanted to grab a beer at Magpies, the brewing company, and it wasn’t open until 5, we had a drink at Zombie Coffee, another place on our bucket list. We ended up sitting in Magpies for a couple of hours, sampling a majority of the menu. By this time it was past dinner time so we called into Monster Pizza, then had a hotteok before calling it quits. We knocked off so many places! 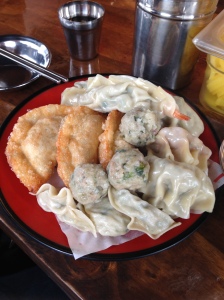 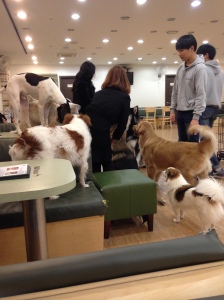 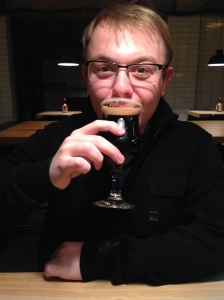 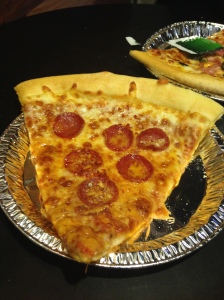 At some point in the recent past James and I agreed to embark upon an adventure that entailed visiting Seoul’s various, renowned, quirky cafes. He’s leaving in a couple of months and I’m just the kind of person who loves to cafe-hop, so our interests were a match made in Korean heaven. Aiden met us in Hongdae, too. I first saw him at the picnic (he’s the guy who’s mastered the British accent and seems to like all things British). First stop: the Hello Kitty cafe, which was very pink and very … Hello Kitty. It’s exactly what you’d expect it to be. After that we ventured to the dog cafe – Bau House – which was incredibly difficult to find what with the vague instructions on the internet and Korea’s general disregard for understandable signs. Eventually, however, we stumbled upon it (it helped having someone who could decipher Korean). Basically the admission is free but you’re required to purchase a drink that costs more than usual, so you’re essentially paying for entry. The cafe was segregated; small dogs on one side, larger dogs on the other. It was pretty crazy! A lot of them were really fussy, energetic, and eager. One of them chewed my cardigan. I was not impressed. There were a variety of breeds, too, which is surprising for Korea. We even bought them treats, and one small, scrappy thing clambered up onto the table and chomped it out of my hand before I could blink.

After that we tried to find the camping cafe, which was another nightmare, until the internet informed us it had closed down. The thing about Korea is there aren’t official websites for many things, so it’s a case of relying on expat blog posts for information and directions. Not the most reliable source clearly. Lunch plans tarnished, we went back onto the main street, surprisingly having real trouble finding a suitable food place, and settled for somewhere that had blurry pictures of questionable Korean ‘pub grub’ but found ourselves on an empty terrace overlooking the main street in Hongdae. Aiden translated the menu for us and we settled on a plate full of chicken. And, um, beer was had. I made them both come with me for liquid nitrogen ice cream afterwards – there was a queue and I wanted to see what the fuss was about – and although it was nice (and big!) I don’t think it was anything to faint over. Still, another tick on the bucket list, right? I’d been messaging Joonho throughout lunch and he met us at the subway station on the way to our next venture – the cat cafe. Honestly, Myeong-dong is the biggest pain to get to from Hondgae. It’s not that far on the map, and it only involves a couple of subway changes, but the trek it takes around these various stations is tremendous; it must’ve taken upwards of forty minutes. I’m never going to Seoul station again let me tell you. Poor Joonho may as well have joined us at Myeong-dong. However, we found the cat cafe relatively easily. A person dressed as a giant cat rather helped with that. It was a nice enough place; lots of cats being pestered by smaller children. I think by that point we just needed a caffeine hit because our energy was waning. Compared to the dog cafe, we didn’t stay long; our phone batteries were dying and we wanted to make it to the k-pop cafe. Aiden left us at that point, and we never found the k-pop cafe due to very vague instructions online once again, and our phones had truly died anyway so we couldn’t take pictures. Why else would you go to the k-pop cafe aside from the picture opportunities? It’s not like any of us are that into k-pop. Instead we sat outside some fountain near the cable car for Namsan tower and drank beer and talked about football and politics and sci-fi movies.

We’re going to do the hanbok cafe another day, possibly Wednesday. It was surprising how fast the day had gone. We must have called it a night at eight, and that was mainly because James was getting up at the crack of dawn to watch the England match in Bulldogs. It’s a crying shame the world cup is on at the worst possible time in Korea, because it can be a lot of fun. I’m not one for football, but c’mon, it’s every four years, and no one begrudges England and football like I do so if I can get into it, anyone can.